2020 has been an interesting year for cruising, with ships docked for uncertain amounts of time due to sailing restrictions, dry docks and refurbishments of some ships being delayed and new ships’ releases being postponed.

However, as we look forward to a brighter year in 2021, and the return to cruise travel, here are a few of the ships that we can expect to appear. Among them, you’ll find mega cruise ships making their appearances for the very first time, older ships making appearances as brand-new vessels and then some cruise lines hitting the high seas for their very first itineraries altogether.

AIDA Cruises’ second LNG-powered cruise ship, AIDAcosma is slated to set sail from Kiel, Germany, in May 2021, headed to the Norwegian fjords and the Baltic Sea.

From there, the ship will sail seven- and 14-day itineraries throughout Norway and then on to ports in Estonia, Finland and Russia. The German cruise line’s new vessel will feature 20 decks and 2,600 staterooms, resulting in capacity for up to 6,600 passengers and a crew of 1,500 individuals.

Built for $950 million, the ship boasts a gross tonnage of 183,900, putting it in the top 10 largest cruise ships in the world, right next to its sister ship, AIDAnova.

Features include a new waterpark with a children’s pool and water slides; a rock-climbing wall; a pool deck that extends the entire width of the ship; and 17 restaurants and 23 bars, including new eateries The Beach House Restaurant and Mamma Mia.

Originally a Destiny-class cruise ship, the vessel, which was first launched in 1998, was set to undergo extensive renovations (though these were temporarily put on hold due to the COVID-19 pandemic) in preparation of a brand-new reveal as the newly-named Carnival Radiance.

Still, even though refurbishments were halted, Carnival plans to launch the ship from Long Beach, California, in 2021. Carnival Radiance will feature much of the latest and greatest Carnival amenities and activities you already know and love, with a few newer features, like the Big Chicken restaurant from Shaq.

Originally intended to debut in April 2020, Celebrity Apex’s big reveal to the world has taken a little longer than expected.

A bit on the smaller side, this member of Celebrity’s Edge class offers 16 decks, an outward-facing design with the new Magic Carpet (a cantilevered, floating platform that transports passengers up and down the side of the ship, with experiences provided while hanging over the open ocean), a Rooftop Garden and a new venue named Eden, with expansive space and outdoor-indoor seating.

Itineraries include trips through the Caribbean and to Mexico, up until May, when the ship will head to Europe, for cruises around Spain, the Greek Isles and the French Riviera for the summer. Celebrity plans to bring the ship back to the Caribbean in the fall of 2021.

When Costa Toscana launches its debut season in late 2021, it’ll mark Costa Cruises’ return to South America following 72 years of absence. The LNG-powered Costa Toscana has more than 2,600 staterooms and introduces a new cabin category to Costa’s cruisers, including new cabins with balconies and terraces.

The ship will head out from Santos, Brazil, the day after Christmas 2021, for cruising over the remainder of the holiday season, with stops in other Brazilian ports. The itinerary is available over both the Carnival and Easter seasons before the ship is relocated to Europe in April 2022.

Princess Cruises’ sixth and last Royal-class ship, Discovery Princess is set to debut next fall, with sailings around the Mediterranean, inclusive of stops in Rome and Athen.

For the 2021 holiday season, the ship will sail around the Caribbean, before sailing around South America in January 2022, repositioning the ship in California, where she will find her homeport in Long Beach, perfectly situated to offer cruises to Mexico in 2022.

The ship offers some of the largest balconies at sea, Michelin-star dining, Princess MedallionClass perks and more of the features that you already know and love from the Royal class of ships.

While Enchanted Princess was scheduled to debut in June 2020, the inaugural sailing has been postponed until later notice.

The ship was originally slated to sail the Mediterranean throughout Summer 2020, before commencing operations in the fall from Florida, with Caribbean sailings through Summer 2021, at which point it would return to the Mediterranean.

At this point, it’s expected the ship will still offer 2021 sailings in the Mediterranean.

Special ship features include the new Sky Suite, a VIP living area with the largest balcony at sea, at 1,000 square feet of space; new dining experiences; and the most pools and whirlpool hot tubs of any other Princess cruise ship. Of course, you can also find all of your other favorite, Royal-class amenities and venues.

Even though the new ship has been delayed multiple times, she’s one of the most anticipated cruise ships of the year, Mardi Gras is a vessel that everyone has on their radar. The first ship in Carnival’s new XL class and the largest in the line’s entire fleet, it’s also the first ship powered by Liquefied Natural Gas (LNG) in North America.

She features 20 decks, with 11 decks dedicated to staterooms. New restaurants include La Piazza, while new entertainment includes the gravity-defying BOLT, a sea roller coaster that’s the first-ever roller coaster at sea. BOLT will be able to accommodate 190 cruisers per hour, with death-defying twists and turns, situated 57 meters above the sea.

Worth Viewing: Behind the Scenes Look Inside the New Carnival Mardi Gras During Construction

At launch, Mardi Gras will offer cruises around the Eastern and Western Caribbean out of the new dedicated Carnival cruise terminal 3 at Port Canaveral, Florida.

An EVO-class cruise ship from MSC Cruises, MSC Seashore is the lead ship for the class, which is a subset of the Seaside class of ships that already exists, only larger.

When launched, MSC Seashore is slated to sail the Western Mediterranean, with stops in Barcelona, Marseille, Genoa, Naples and more. The ship will sail from Miami in the 2021-22 Winter season. In addition to the ship’s larger size, it will also offer the highest ratio of outdoor space per guest out of any MSC Cruises ship.

It additionally offers room for more than 750 more passengers, as compared to ships in the Seaside class. Thus, expect more restaurants, bars and water features to accommodate the larger crowds.

Odyssey of the Seas (Royal Caribbean)

Originally expected to homeport in Fort Lauderdale, Florida, with cruises beginning in November 2020, Odyssey of the Seas will now launch in April 2021 in the Mediterranean, due to pandemic delays.

The Quantum Ultra-class ship will be the first of its kind to travel throughout both Europe and North America. She is the sister ship to Spectrum of the Seas which entered service in 2018.

Special features include the SeaPlex playground, the largest indoor activity space at sea (and this ship’s particular SeaPlex features more ways to have fun than ever before, with trapeze bars, laser tag, bumper cars and more); the FlowRider surf simulator; a bungee trampoline experience; skydiving simulator; two-level pool deck; and more.

The largest ship for P&O Cruises yet, as well as the largest to serve the British market, this $950 million ship with its 18 decks is one of two identical ships, the second of which is yet to be announced.

If you book a Spring 2021 sailing on the P&O Iona, you can expect seven-day round-trips through the Norwegian fjords. She was delivered by the Meyer Werft shipyard in October 2020.

Thus, a new MS Rotterdam was born, offering guests who enjoyed the previous iteration more luxuries than ever before. Holding nearly twice as many guests, the larger ship will sail the summer of 2021 throughout Northern Europe and the Baltic Sea, round-trip from Amsterdam.

Expect favorited Holland America Line amenities, such as the World Stage 270-degree surround screen, Rudi’s Sel de Mer and the Grand Dutch Cafe. You can view construction photos of the ship released by the cruise line in December 2020.

Virgin Voyages’ second ship, Valiant Lady is an adults-only ship that many cruisers have been eagerly waiting to try. The brand promises a cruising experience like none you’ve ever had, though that’s still yet to be seen.

Enthusiastic cruisers will find itineraries sailing from Barcelona and across the Mediterranean through the end of 2021, at which point the ship will reposition, heading to Miami for Caribbean cruises.

Expect lavish staterooms and fine dining, as well as plenty of opportunities both to indulge in wellness pursuits and a bit of partying.

Virgin Voyages’ first ship, Scarlet Lady has been in the works for years, and when it finally was meant to make its debut, the 2020 pandemic put things on hold, with the ship’s itineraries continuously pushed back.

However, cruisers are hopeful that Scarlet Lady will make her grand appearance in the coming year and that normal cruising will resume in May 2021. Currently, itineraries are available as soon as January, with trips around the Caribbean embarking from Miami.

The adults-only ship features 20 restaurants and bars (and not a single buffet among them), extensive entertainment options and even an on-board tattoo and piercing parlor.

Viking’s seventh ocean vessel, Viking Venus, heads out onto the waters in early 2021, with itineraries through Scandinavia and Northern Europe. The small ship offers luxury at every turn and an intimate feel.

Choose from a variety of staterooms, including the Penthouse Veranda, and take advantage of plentiful Viking-specific amenities that you won’t experience anywhere else, with any other cruise line. Upcoming cruises depart from popular ports, such as Barcelona, London, Bergen and Stockholm.

This mega-ship is MSC Cruises’ second Meraviglia Plus-class ship. Some of its highlights are two new Cirque du Soleil at Sea shows, created specifically for the brand; new digital features; and more poolside space, as well as plentiful stateroom options.

When the ship launches in April, it’ll offer short cruises around the Mediterranean at first, before switching to longer European cruises and then Northern European itineraries throughout the summer, before heading back to the Mediterranean in the fall of 2021.

She in the very final stages of outfitting at the Chantiers de l’Atlantique in Nazaire, France and was floated out in December 2020.

These are just the major cruise ships that are currently aiming to debut in 2021. There are many smaller cruise ships that will enter service such as expeditions vessels and large luxury yachts. With so many delays in 2020, it will make for a busy 2021 with new ships kicking of sailings after being on hold. 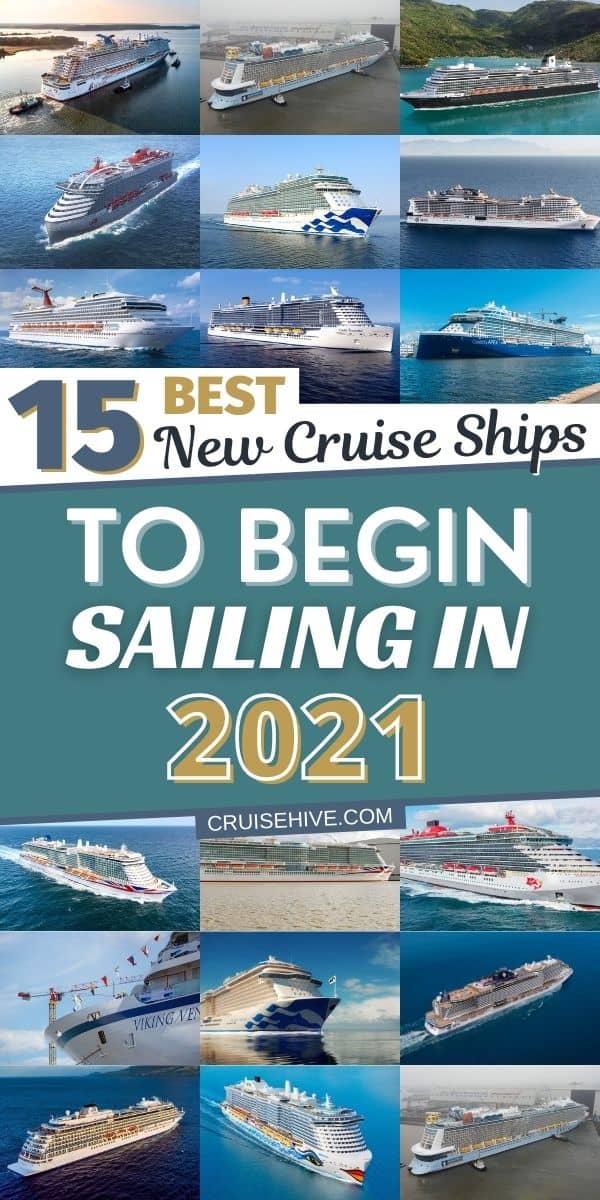