This is not your run-of-the-mill cruise line private island.   And it might be what MSC Cruises did NOT include on the island that stands out the most.

I just visited MSC Cruises’ new private island as an invited guest of MSC, and there were a few immediate takeaways from my day on Ocean Cay. 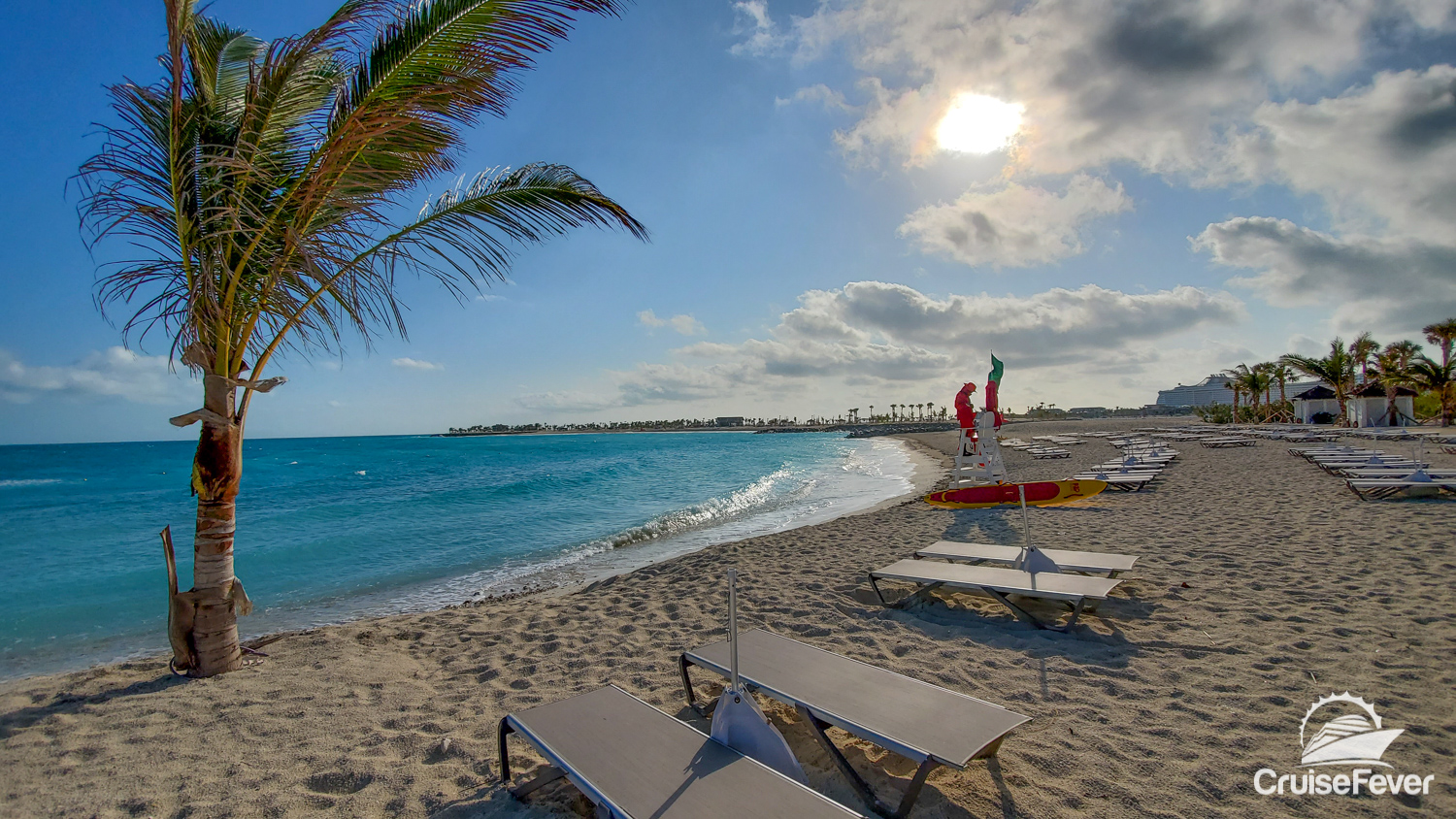 Ocean Cay MSC Marine Reserve (the official name for the private island) has been a few years in the making.  The patch of sand in the Bahamas was an industrial island for many years, so MSC had to start from scratch when turning the island into a pristine paradise.

In fact, over 1,500 tons of scrap metal and waste had to be removed.  Crews worked for weeks pulling rusted metal from the ocean and preserving some pieces that had become vital to the marine life around them.

MSC Cruises has made a conscious effort to develop the island in the most eco-friendly way, and they have already transformed this beautiful cay for the better.

So where did all those palm trees and plants come from?  Every single one of them had to be brought in and planted in strategic locations.

77,000 trees, shrubs, and plants were brought to Ocean Cay.  It will take some time for everything to fully mature, and parts of the island might seem a tad sparse, but this will all fill in very nicely over the next few months and years.  Even still, most of the palm trees were larger than I expected them to be.

Check out Cruise Fever’s video below to get a tour of Ocean Cay:

Ocean Cay is part of the Bimini island chain on the western side of the Bahamas.  It’s only 65-miles from Miami and this offers one huge benefit that I have detailed below.

Here are 7 reasons for taking an MSC cruise just so you can check out Ocean Cay: 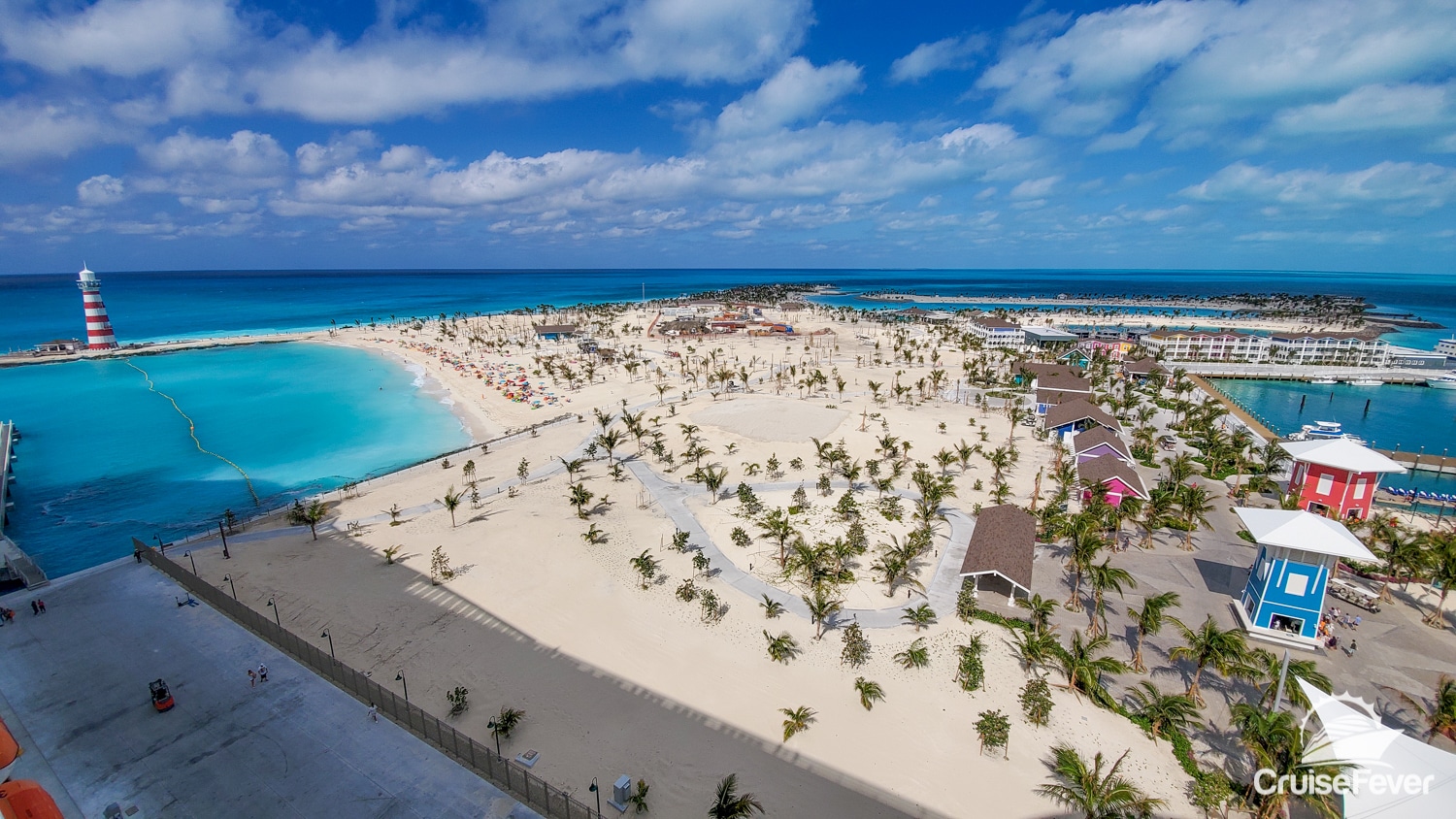 If you love the beach and just want an amazing beach day during your cruise, it’s hard to beat over 2 miles of lovely beaches all over Ocean Cay.

There are several other beaches on Ocean Cay, most notably North Beach which is also on Ocean Cay Lagoon.  It’s just a longer walk to get to it, but it’s slightly less crowded because of this.  More on the lagoons and swim areas below.

MSC also offers electrics trams throughout the island so getting around doesn’t have to be an excursion to get your 10,000 steps in.

Plenty of Loungers and Cabanas 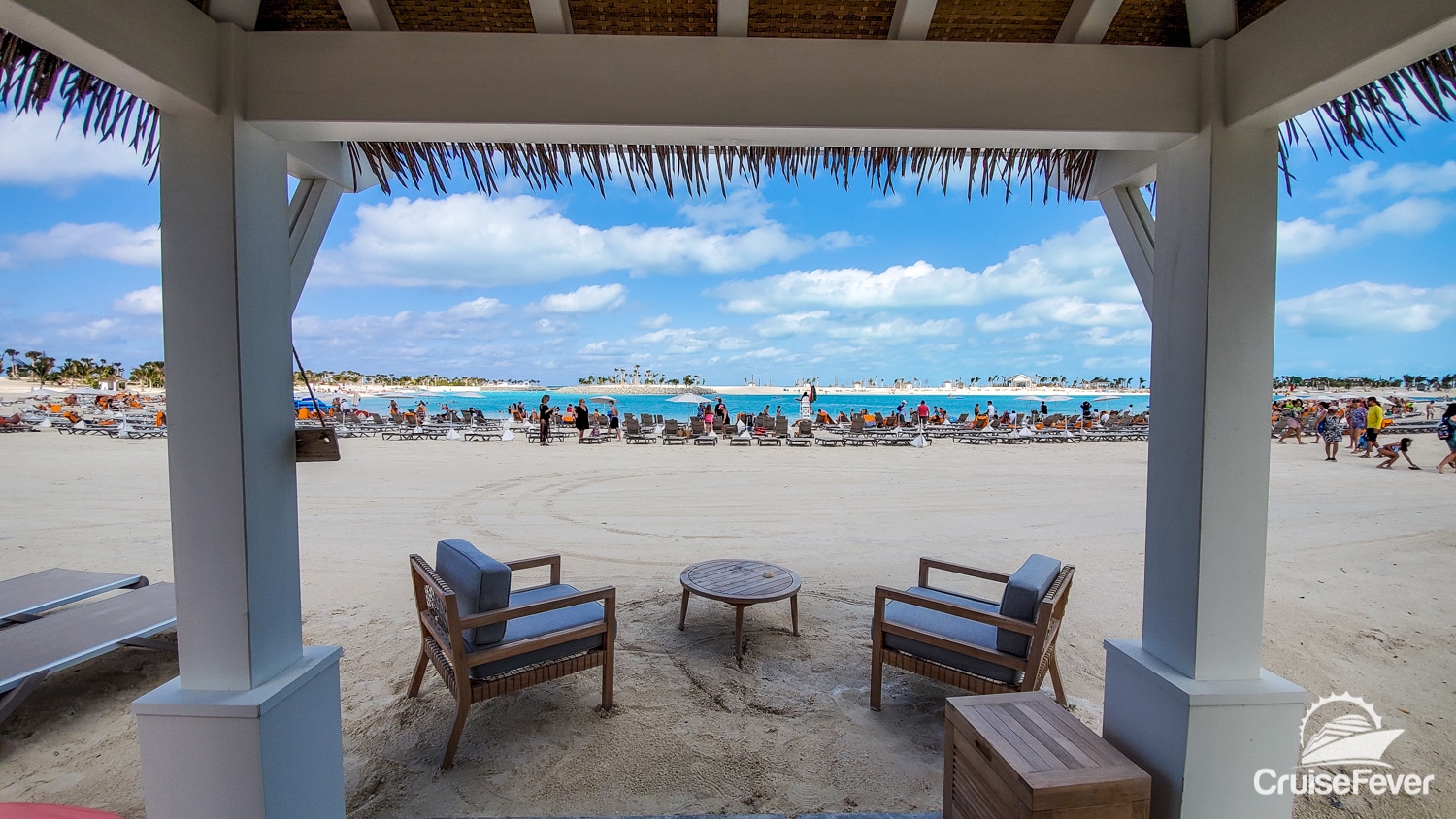 With this much beachfront property it would be a shame if you didn’t have a place to lie down or relax.

Thankfully every beach has enough loungers for everyone and then some.  Many beaches also offered shade umbrellas that attached to the lounger.  This was important because with palm trees still needing time to grow, shade was something of a commodity.

Even during the middle of the day when most people from the cruise ship were on the island there were always plenty of loungers available for use.

So you don’t have to worry about getting off the ship right away just so you can reserve your lounger. 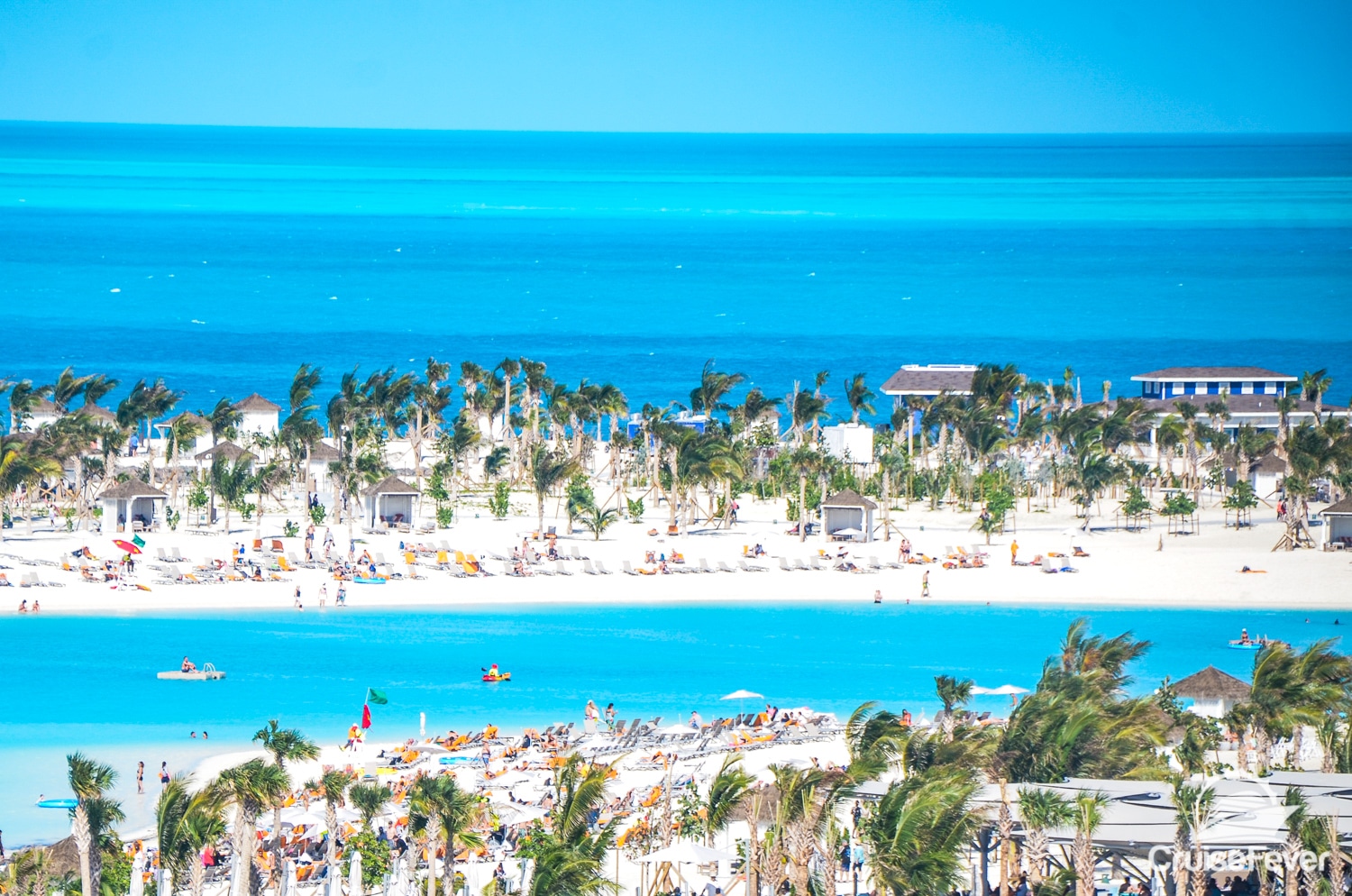 Cabanas can also be found throughout the island.  These are available for rent and offer shade, comfortable seating, a ceiling fan, and a place of respite when you’re taking breaks from watersports or swimming in the lagoon.

There are massage cabanas on the spa portion of the island as well, where you can get a 30-minute or longer massage while breathing in ocean air.

One thing I noticed was that the spa at Ocean Cay had different music playing through the speakers.  These Bose speakers are all around the island and are about 20 feet apart.  At the spa the music was more ambient and offered a relaxing mood.

Yes, it’s true that there is no pool on Ocean Cay.  But the calm waters of the lagoons were more than inviting and offered a greater swim area than any pool I know of.

Seakers Family Cove is the smaller lagoon that is specifically for children of all ages.  The beach that wraps around this area makes it easier to keep an eye on the kids, and it’s right across the way from the larger Ocean Cay Lagoon.

Ocean Cay Lagoon offers a gigantic swimming area that is never deeper than 8 or 9 feet.  You can rent inflatables to soak in the sun, and there are platforms in the middle as well.

What amazed me was the calmness of the waters in the lagoon.  I visited Ocean Cay on a very windy day.  It was so windy, in fact, that the snorkeling excursion was cancelled because of the waves around the island.  Even with decent size waves crashing against the south end of the island, the lagoons were peaceful and serene.  This is a testament to the design of Ocean Cay. 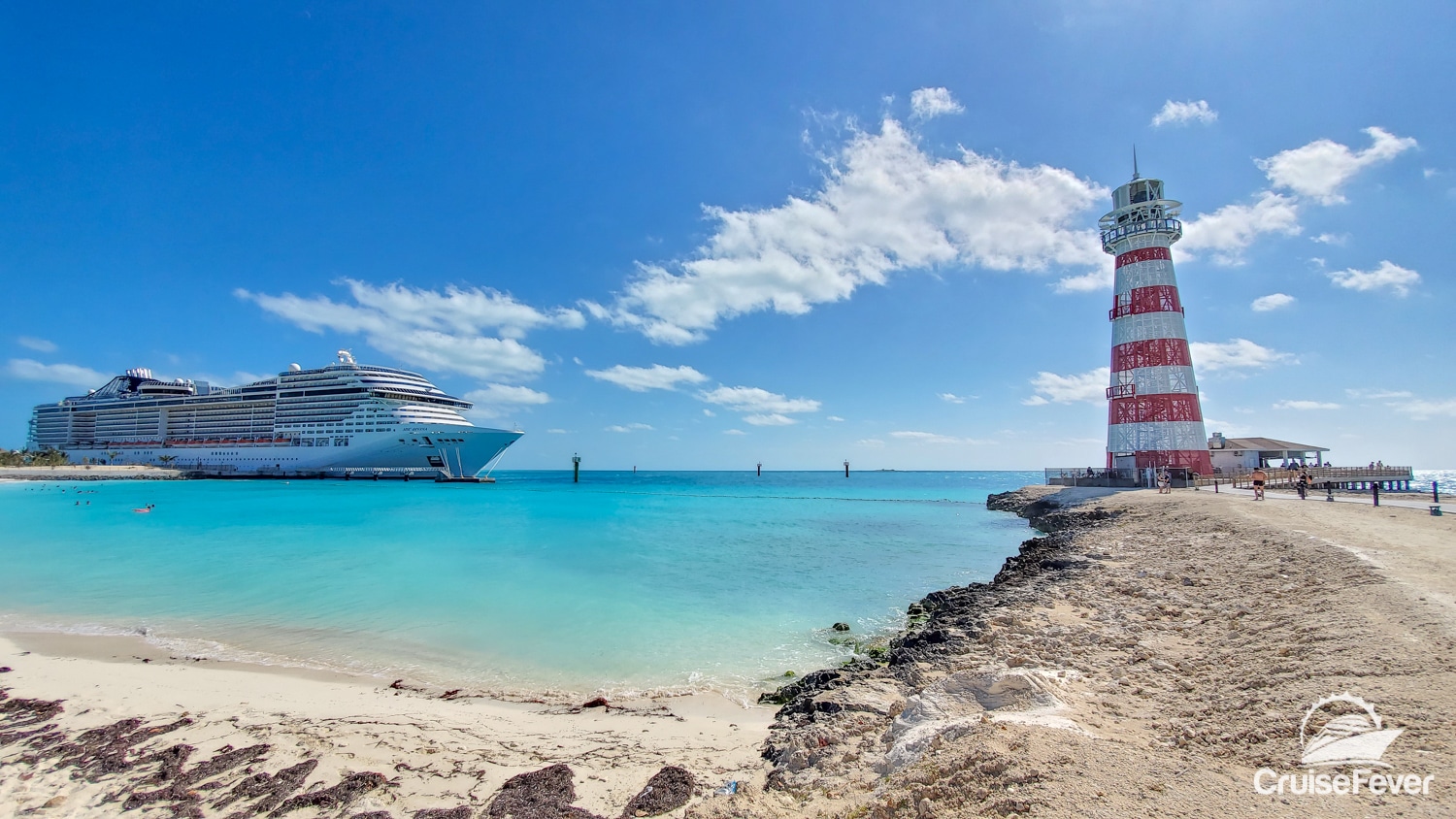 This is probably the first thing you will notice about Ocean Cay, and it’s a great visual landmark for the island.

As part of an excursion I went up the 165 steps to the top of the 100-foot tall lighthouse.  The views were stunning and it was a great place to get some pictures of the cruise ship as well.  By the way, 4 MSC cruise ships will be sailing to this private island, so you have some options there when it comes time to book.

For those worried about not being able to make it up 165 steps, there is a halfway point where you can stop to rest, but you do need to be able to go up and then down the steps on your own to sign up for this excursion.

At the bottom of the lighthouse is Lighthouse Bar.  Plenty of seating on the overlook deck offer a relaxing place to soak in the sights here as well.  Just sit and listen as the water crashes against the rocky point of the island.

Climbed the 165 steps of the lighthouse on Ocean Cay and the views were awesome! #sponsored #oceancay #msccruises pic.twitter.com/eNKzDEsFHf

At night the lighthouse is transformed into an LED light show unlike any other.  Synced to the music, the lights paint the lighthouse in vibrant colors and the spotlights pierce the night as they move in rhythm.

You can watch the show from the ship or beach at Lighthouse Bay, but the angle from the ship can be a little awkward unless you have a forward facing balcony or if you’re a member of the Yacht Club. 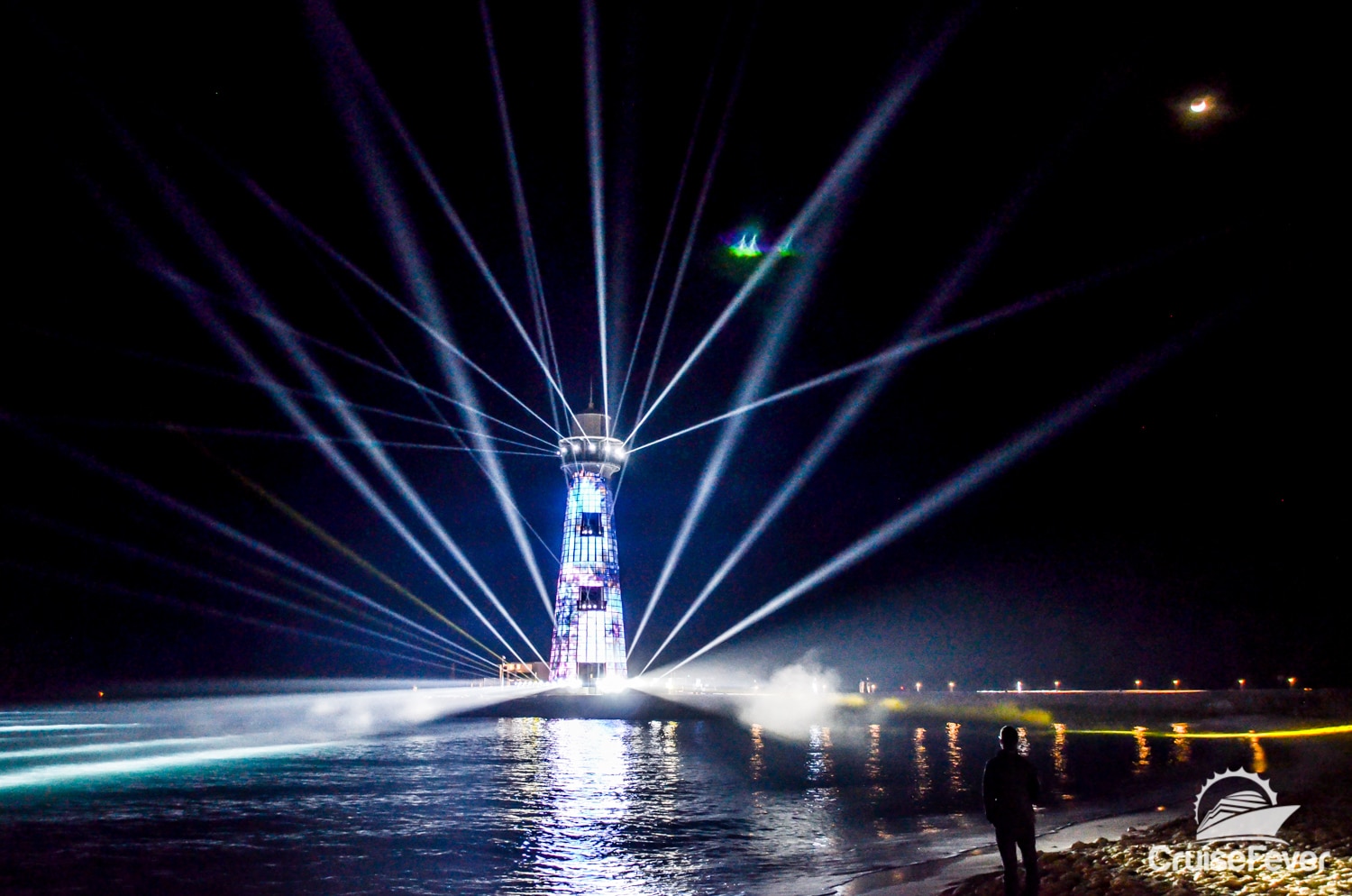 You probably want to get off the ship to watch the light show anyway because then you can take part in the Junkanoo Parade. 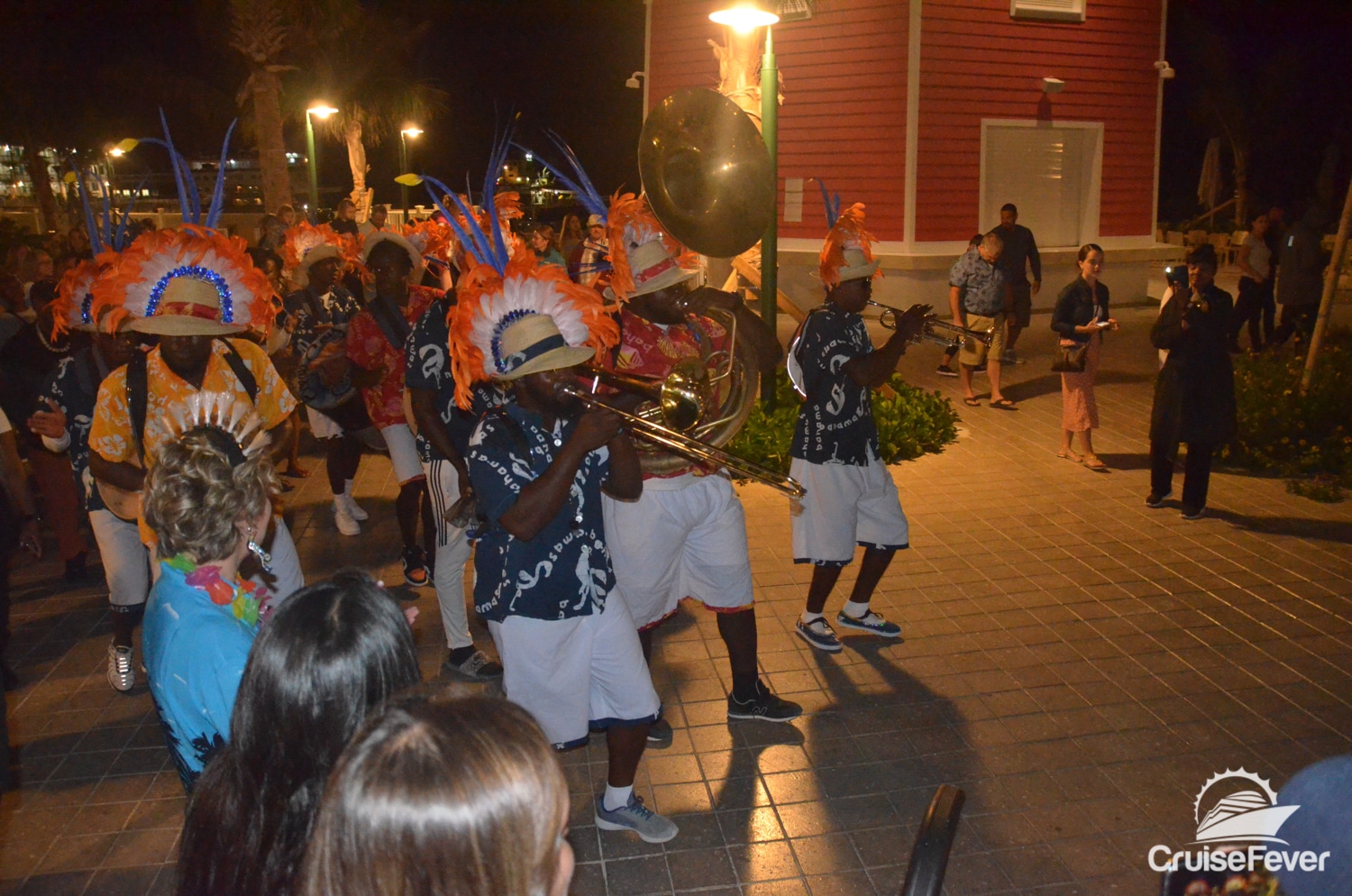 One big advantage to being only 65 miles from Miami is that ships that stop at Ocean Cay are able to stay much later into the night.  This allows for cruisers to enjoy a light show and a cultural experience like no other, the Junkanoo parade.

The parade starts at Springer’s Bar and ends at Lighthouse Bay.  The street parade is a combination of brass instruments, drummers, dancers, and colorful garb to reflect the cultural heritage of the Bahamas and Caribbean.

It lasts about 30 minutes, at the end of which the Lighthouse light show begins.  After the light show there is a dance party that takes place at the beach as well.

Participation in the parade is encouraged as many cruise passengers took part in the festivities. 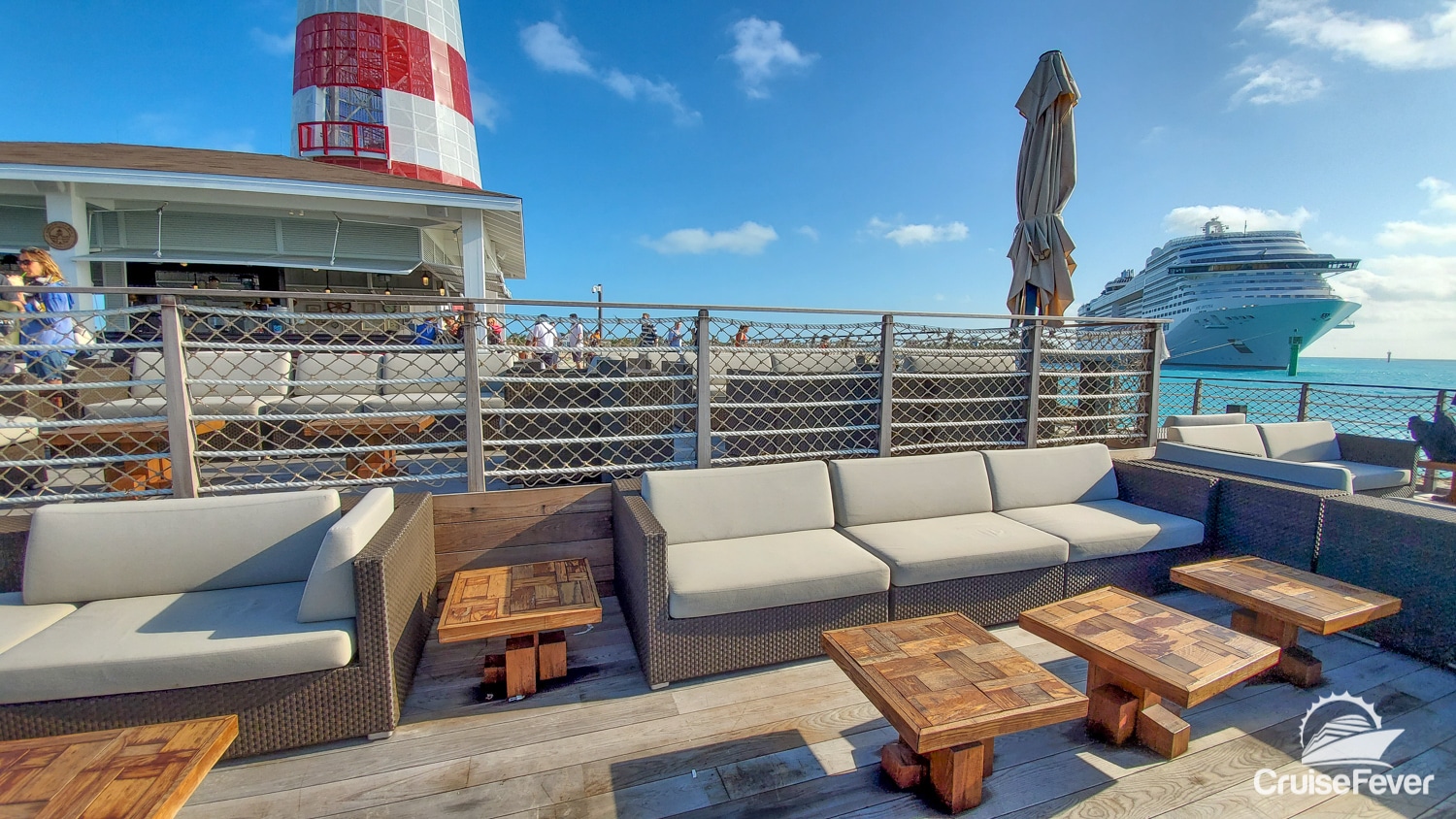 What good is a private island if you can’t get something good to eat right?  Seakers Food Court is right about in the middle of the island.

But it’s a good size island.  It felt way bigger than I had imagined anyway as I was walking around every inch of it.  So what did MSC do?  They brought in food trucks.

Several food trucks can be found throughout Ocean Cay to make the food way more accessible and to free up space at the main food court.

I thought this was brilliant because some of the beaches on the western side of Ocean Cay can be a good walk to the food court.

Right now the food trucks have the same food that can be found at the food court for the most part: hotdogs, hamburgers, etc.  In the future these food trucks may offer more specialty food items.

Either way, the main beaches had food trucks right next to them so sun-seekers could grab a quick lunch and not lose any beach time.

There are also bars all across the island, including the one in the picture above that is at the base of the lighthouse.  You can use your MSC cruise card to make any purchases or utilize your drink package at these locations.

Marine Preservation is a Priority

The water around Ocean Cay is simply stunning and @MSCCruisesUSA is dedicated to keeping it that way with its marine conservation initiative. #sponsored #oceancay #supercoralplay pic.twitter.com/HGCoMRrGdJ

MSC is taking the environment around Ocean Cay seriously.  There is a reason this is a marine reserve and not just another private island.

As part of MSC’s coral restoration program they ask that guests use reef safe suntan lotion and sunscreen.  This can be purchased in the gift shops on the ship and on the island as well.

MSC has partnered with Stream2Sea to make coral restoration in the marine reserve a priority.

The 64 square miles around Ocean Cay make up the marine reserve that will be protected and maintained by the cruise line, offering scientists and marine biologists the opportunity to see the coral and marine life brought back.

Multiple studies have been done to see what kind of fish and other marine life is currently around the island and how programs can help foster their health.

So what did MSC not include on the island?  You won’t find any 100-foot waterslides, roller coasters, or other theme-park related activities on Ocean Cay.

This is a cruise destination that attempts to highlight the natural beauty of the Bahamas instead of detracting from it.

For someone like me who would rather relax and unwind during a visit to a private island than go for the adrenaline rush of an amusement part, I really appreciated this. 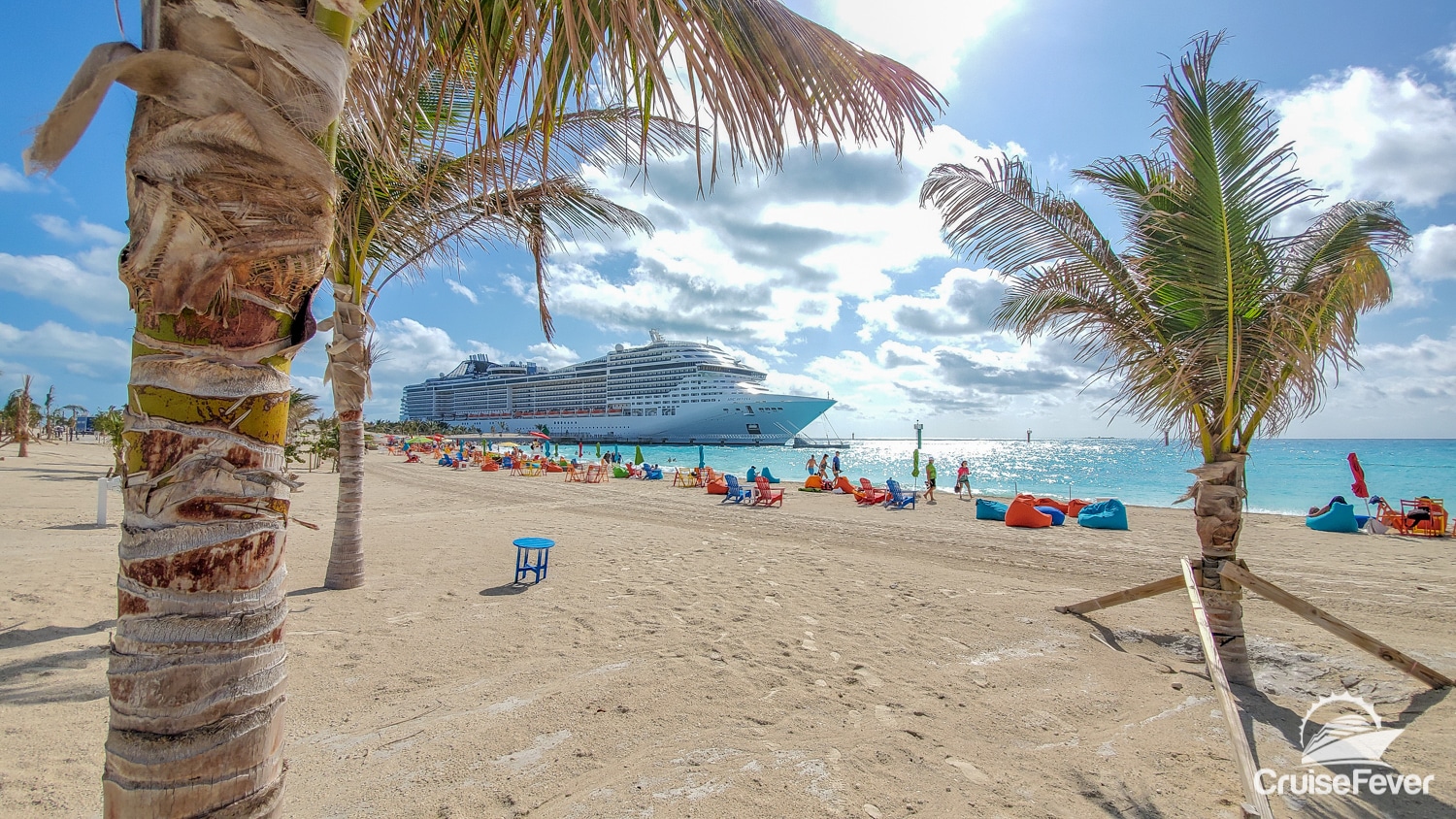 The diving and snorkeling around Ocean Cay MSC Marine Reserve will only get better and better as efforts continue to allow the coral to thrive and as “Super Coral” initiatives are utilized.

Ocean Cay Village offered several shops for souvenirs, sunscreen, snacks, and other items, and there is an ice cream and coffee shop right next to Springer’s Bar.

The restrooms on Ocean Cay were very nice.  They were clean, had high ceilings, and offered several showers for rinsing off any accumulated sand.

There are 7 rental stations on the island to rent umbrella’s and floating mats, and there is even a wedding pavilion on the island if you’re looking to renew your vows.

There is Wi-Fi on the island, and if you have an internet package on the ship you can use it all over this beautiful cay as well.

More will be added to Ocean Cay over the coming months as the island is just newly opened for cruise visitors, but so far I really like where MSC is going with this.

If I left anything out or you have other questions feel free to ask them in the comments below.