Costa Toscana which is currently under construction at the Meyer Turku shipyard in Finland has floated out onto the water for the very first time. This a major construction milestone for the new LNG mega-ship that will be operated by Carnival-owned Costa Cruises.

The float ceremony has been held for the Costa Toscana cruise ship on Friday morning at the Meyer Turku shipyard in Finland. This is a major milestone for the vessel and Costa Cruises as the ship touched the water for the first time. The basin was flooded under freezing cold temperatures and the ship will remain floated until she is delivered in December 2021.

“Despite the current challenging scenario, Costa Group is confirming its investment in fleet expansion. We are confident in the recovery of our industry, and we are excited about the arrival of new ships like Costa Toscana, which embodies the elements we want to focus on for the future.

First of all, it is an excellent and innovative ship, attractive for new customers, which is going to be fundamental, especially when people will be able to freely travel again and will have a great desire for holidays. Looking beyond the pandemic, the second element we are focusing on is to complete the transformation of our fleet and operations into a sustainable model.

In addition to LNG technology, we are developing other innovative solutions, such as shore power and batteries, as we continue to work towards achieving zero emissions over time.”

The shipyard released new photos of the Costa Toscana float out. Even during the very cold conditions, the ceremony continued. As seen in the photos water can be seen starting to fill up the basin:

The ship will be powered by Liquified Natural gas (LNG) and will become the sister ship to Costa Smeralda which already joined the fleet in 2019.

Costa Toscana is part of a new generation class that parent company Carnival has ordered and already welcomed across its cruise brands. AIDA Cruises was the first with the AIDAnova and then Costa Cruises with Costa Smeralda. Carnival Cruise Line also recently took delivery of Mardi Gras along with P&O Iona for British-based P&O Cruises. Each vessel has slightly different features but they are all generally based on the same class.

Once completed, Costa Toscana will be an impressive 185,000 gross tons with a maximum guest capacity of 6,730. She will be in the top 10 largest cruise ships in the world. 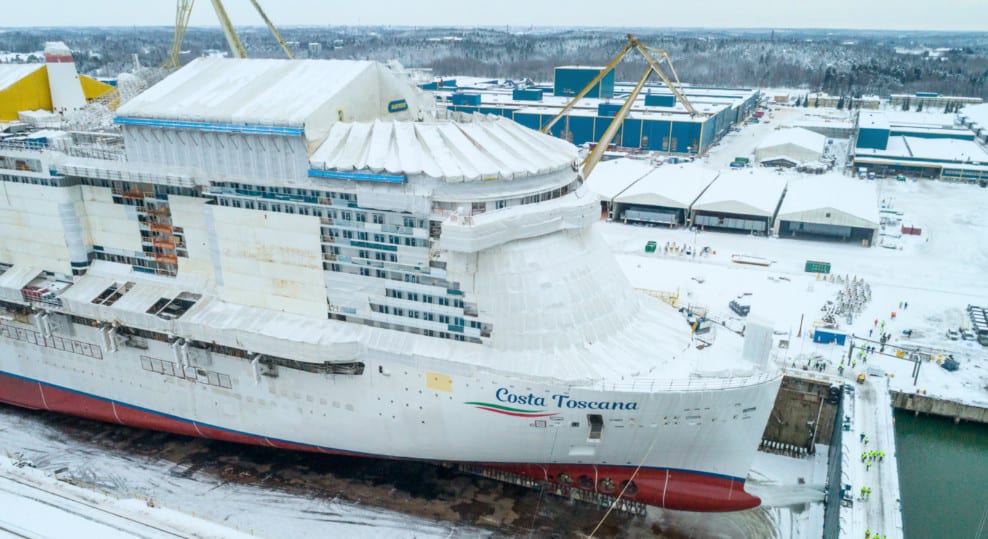 PrevPreviousCarnival Vista Cruise Ship: Overview and Things to Do
NextWhy Haven’t We Had Any Test Cruises Yet?Next
Menu
Copyright © 2021 BoatMyWay.com | Powered by BoatMyWay.com