The tension is slowly building until the most anticipated, most significant, most fun-filled ship to ever sail under the Carnival Cruise Line flag arrives in Port Canaveral. It’s less than 48 hours before the newest lady in the Carnival fleet will finally sail into the channel and be welcomed by thousands of fans.

Since it was announced that the new Carnival cruise ship was departing Barcelona on May 21 and heading for Florida, there has been a huge interest on the arrival. Carnival Cruise Line has now revealed details of the arrival of its first Excel-class cruise ship.

Friday, June 4, Mardi Gras will sail into the channel where she will sail past Jetty Park Pier and the Fisherman’s pier at the entry towards Port Canaveral. According to the latest forecasts, the ship will enter the channel around 6 AM; however, you should be able to see her sailing towards the port shortly before that time.

Carnival, as can be expected, is making the arrival a very special event! Mardi Gras will be escorted into the port by two other Carnival ships, Carnival Freedom and Carnival Liberty! By the sound of it, this will be a once-in-a-lifetime opportunity and a great photo opportunity to get Mardi Gras and her sisters in one picture.

For that reason, Carnival has already announced it expects thousands of people to welcome Mardi Gras upon her arrival into port. Once she has entered the port and docked, which is expected to happen around 07:30 AM, the vessel will be officially welcomed into her new home by Carnival President Christine Duffy and Canaveral Port Authority CEO Captain John Murray. They will be making their welcoming remarks around 09:15 AM.

It’s a massive moment for Carnival Cruise Line and one that certainly deserves the attention it will be getting. Mardi Gras is one of the most anticipated new cruise ships in the fleet, ever. While she isn’t the first LNG ship to be delivered to Carnival Corporation, she is the benchmark that all other Excellence class ships from AIDA, P&O UK, and Costa are compared to.

Mardi Gras was first conceptualized in 2016, and the building started in 2018. The vessel floated out of the yard at Meyer Turku in Finland more than a year ago, on January 24, 2020. It wasn’t until December 18, 2020, that she was finally handed over to Carnival Cruise Line.

For the last five months, Mardi Gras made a short stopover in Rotterdam in the Netherlands and sat docked in Barcelona for four months before she finally set sail towards her new home, Port Canaveral.

Mardi Gras is and will be a game-changer in the cruise industry. She is the first cruise ship in America powered exclusively by eco-friendly Liquefied Natural Gas (LNG). It is also the first vessel ever to feature a roller coaster.

Mardi Gras will be sailing roundtrip cruises to the Caribbean from Port Canaveral. If you want to see the beauty sail into the channel, below is the schedule as released by Carnival Cruise Line; keep in mind, this is subject to change at short notice: 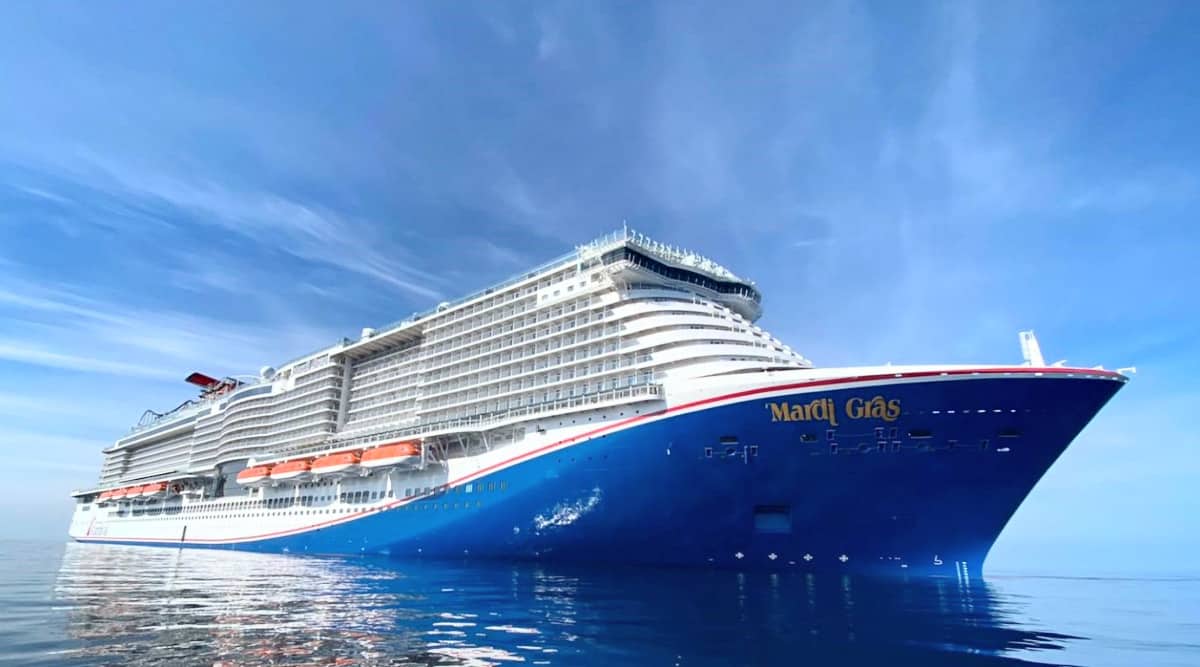