Carnival Cruise Line president Christine Duffy provided an update on where the company stands regarding a resumption of sailing. Duffy covered various subjects; however, the thing on most people’s minds will be what Carnival will be doing with making Vaccinations a requirement or not.

As other cruise lines have taken that route, and several countries have even started giving out Vaccine passports that provide extra freedoms, it looks for now that Carnival will not be doing so.

Duffy started the video chat by wishing everyone well, and while she hopes to be able to talk to guests directly soon, the video chats she has been sending out have been an excellent way to provide updates. You can watch the video below:

Carnival Cruise Line has been spending the latter half of 2020 on developing new procedures and policies for when the ships will start sailing again and approve a return to cruising. Something we saw a glimpse of when the company posted some new health procedures online by mistake last month. Although these procedures were not finalized, they gave us an idea of what’s to come.

The arrival of several different vaccines, including a single dose one, has ensured that the planning stages have taken a new direction. The efforts of the Biden administration have seen an increase in vaccine production and distribution. Duffy had the following to say:

“With the news that the vaccine will be widely distributed, and available to most Americans starting this spring. There is a growing sense that many activities including cruising will be able to find a secure route to return.”

Duffy said that the efforts in vaccine distribution and production create a solid base for the cruise industry to make a return, as this spring we should start seeing the effects.

The Pause Is Not Over

The good news doesn’t mean the wait is over; in fact, it has created a situation where cruises have now been cancelled further into 2021. All cruises in the US in May have been canceled, while no less than eight vessels will be going in to dry dock. Cruises in Australia have been canceled until the end of June, at least.

At the same time, while we are still awaiting the arrival of Mardi Gras in the U.S., according to the president, she will be arriving soon, although for now, she remains off the coast of Barcelona, Spain.

Guests continue to receive the option for refunds on canceled cruises. However, the company also provides guests incentives to keep their cruises or transfer these to other dates.

Other than keeping guests informed, Duffy says she cannot commit to any other statements regarding a resumption of cruising. However, she said that Carnival Corporation is a financially sound company with enough cash to keep going throughout this crisis. At the same time, bookings have been showing great numbers.

Carnival Cruise Line has been busy with making enhancements to the vessels, from fresh paint around the ship to deep cleaning all areas of ships. New food digesters have also been installed, which has been a sore point for Carnival as they have had some compliance issues over these in the past.

Outside of the ships, the ground has been broken at the new terminal in Port Miami, which is in preparation for Mardi Gras’ sister ship’s delivery, Carnival Celebration:

“We’ve broken ground on a new terminal at Port Miami to get ready for the delivery of Carnival celebration in 2022. She will be our next Excel class ship coming in time for our 50th Anniversary. Meanwhile, we continue to plan for the future as our new ship Mardi Gras will be arriving in the US Soon.”

There have not been any final decisions on whether if or when vaccination might be required in the near future for guests. If vaccinations became a requirement from either the company itself or the CDC, the company would need to secure vaccines for the crew members, which seems to be difficult at best currently. Duffy:

“We also know that many of you have been asking about the vaccine. We do not have any details yet on whether it will be required or if how and when we might be able to secure vaccines for our crew. What I can say at this time is that if you’re able to get a vaccine in your home country that you should so.”

According to Duffy, the future looks a little brighter today than it did at the start of the year. Of course, the brightest day will be when we can finally enjoy a cocktail at the pool bar onboard. 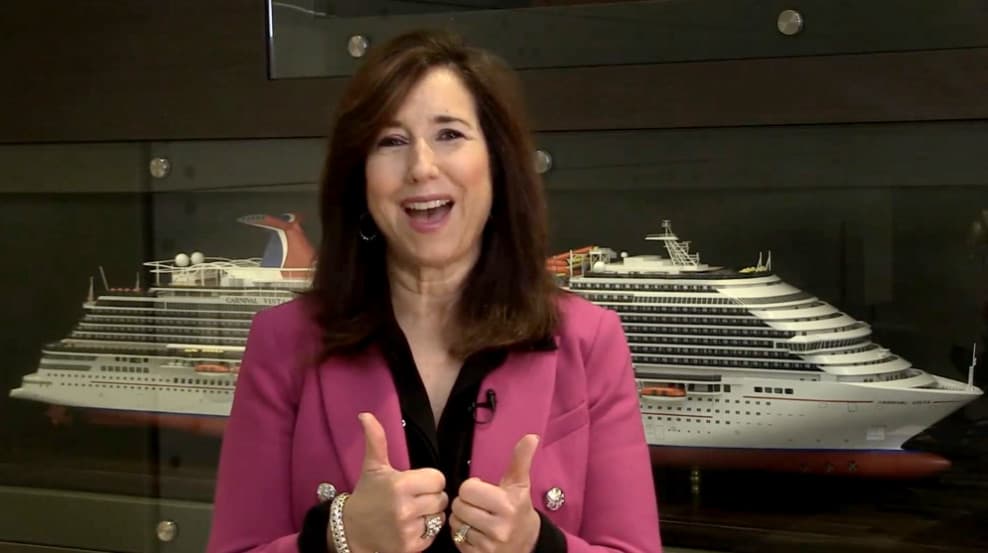