Carnival Cruise Line has revealed the Italian-themed La Piazza Zone on the New Mardi Gras cruise ship that was recently delivered. This comes on National Pizza Day so as you can tell, it’s all about the Pizza in these new details from the cruise line.

Pizza has always been an important part of the Carnival cruise experience and thanks to it being National Pizza Day, the cruise line has now revealed new details about the Italian-themed La Piazza which is one of six themed zones on Mardi Gras.

This stunning new area will be home to a variety of new food and beverage outlets along with Carnival’s longtime favorites. The space mimics the Italian streets with matching decor and a hint of red.

Located along the promenade there are some nice touches where guests can take a selfie next to the Vespa scooter and fiat, both from 1972 which is in fact the year of the original Mardi Gras and the founding of Carnival Cruise Line.

The new bar venue will have a classic Italian look and offer cocktails such as Aperol Spritz. There will be Italian wines available from different regions across Italy, Italian beers and even Italian Lavazza coffees.

This will be the place to get a hand-pressed sandwich such as Salumeria stuffed with capicola, prosciutto, salami, provolone, and roasted peppers, as well as the Peppe featuring mortadella, provolone, mozzarella, tomatoes, and spicy olives.

Even though this venue is featured on other Carnival cruise ships, Mardi Gras will feature the largest. Cucina del Capitano will offer an impressive menu as an Italian inspired restaurant. The decor will feature historic photos along with memorabilia from Carnival officers.

The Pizzeria is always an important place during all hours on a Carnival cruise and following in line with that tradition the Pizzeria del Capitano will be open 24 hours. Guests can enjoy freshly baked artisanal pizzas by the pie or by the slice.

The new Mardi Gras has a total of six themed zones and in addition to the Italian-inspired La Piazza, there is the French Quarter, Grand Central, The Lido, Summer Landing, and The Ultimate Playground that features the first roller coaster at sea named BOLT.

So at the moment, the new Carnival Mega-ship is on hold in Barcelona, Spain, and will soon head over the Atlantic to Port Canaveral, Florida. The ship will debut on her first official voyage with passengers on May 29, 2021, and offer week-long Caribbean cruises.

She’s already been delayed a number of times due to the cruise suspending operations. Hopefully, there will be no more delays and guests will be able to enjoy the largest and most advanced Carnival cruise ship ever constructed.

She’s fully powered by Liquified Natural Gas (LNG) at over 180,000 gross tons and with a guest capacity of 5,282 at double occupancy. She was constructed at the Meyer Turku shipyard in Finland and was recently delivered. 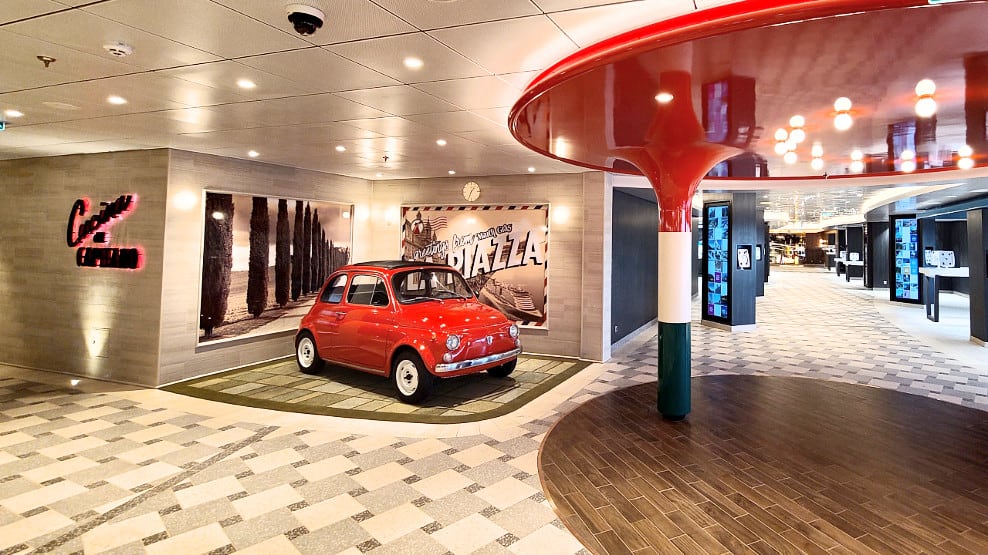