Carnival Cruise Line opened a new ‘Heroes Tribute Bar’ on their newest cruise ship, Carnival Panorama.  At the opening, Carnival announced that the bar honoring members of the military will be rolled out to other cruise ships in the Carnival fleet.

Christine Duffy, president of Carnival Cruise Line, was joined by military personnel and veterans on Carnival Panorama’s inaugural sailing for the grand opening celebration and toast with Carnival’s extended military family of guests and employees. 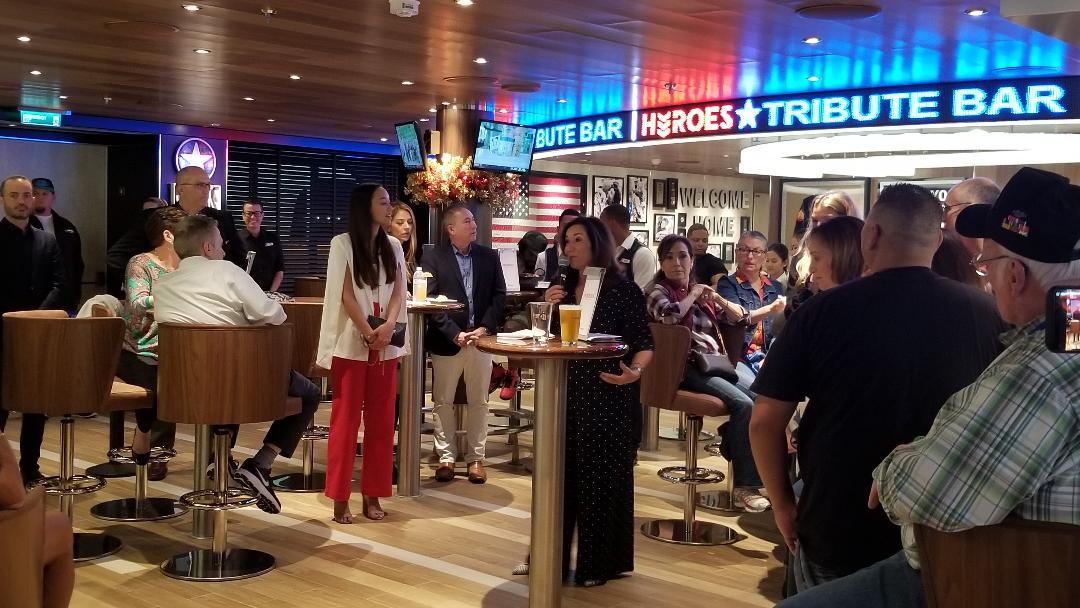 She also said that a portion of the proceeds from the new entertainment and gathering spot will benefit Carnival partner, Operation Homefront, a national nonprofit organization dedicated to building strong, stable and secure military families. Carnival prides itself on carrying more active and retired military personnel than any other cruise operator.

Specialty cocktails and beer will be offered and served in a custom pint glass with a portion of each sale benefiting Operation Homefront. Pint glasses are also available for purchase. While the concept will initially be a feature exclusively on Carnival Panorama, Duffy said that the line will look to amplify the spirit of the Heroes Tribute Bar at special moments across the Carnival fleet.

Carnival has been a longtime supporter of the military, hosting a military appreciation reception each cruise, shipboard concerts for military personnel, and events at U.S. Naval bases.

Carnival Cruise Line received the U.S. Honor Flag in recognition of its military support and Duffy participated in the 88th Joint Civilian Orientation Conference, the oldest and most prestigious public liaison program in the Department of Defense.

Carnival Panorama sailed on its inaugural voyage this week and launched year-round seven-day cruises to the Mexican Riviera December 14, calling at seaside destinations such as Puerto Vallarta, Mazatlan and Cabo San Lucas.