The seventh-largest cruise ship in the world will be something to behold when launched next December 2022. In our previous post, we went into the incredible experiences the vessel will offer its guests.

We look at the itineraries MSC World Europa will sail, as well as the incredible engineering that goes on behind the scenes on a mega-ship.

Under construction at the Chantiers de l’Atlantique shipyard in Saint-Nazaire, France, MSC World Europa will be the first LNG-powered ship in the ever-growing MSC fleet.

Inaugural Season in the Persian Gulf

MSC World Europa will embark on her maiden voyage in December of 2022 on a special 4-night voyage from Doha in Qatar to her new homeport, the ultra-modern metropolis of Dubai. For those who want to stay on board the ship earlier, the vessel will feature as a hotel ship for the FIFA World Cup in November 2021.

After her maiden voyage, MSC World Europa will sail on 7-night voyages from Dubai to Abu Dhabi and Sir Bani Yas Island. Guests will have exclusive access to the paradise island, which features an exotic array of wildlife and beautiful white-sand beaches.

After this, the ship will be calling into Dammam in Saudi Arabia. World Europa will be one of the few cruise ships in the world that will sail to the Kingdom, where guests will have the chance to visit Al Ahsa oasis, a UNESCO World Heritage site. Before returning for an overnight in Dubai, the ship’s last port of call will be in Doha, the capital of Qatar.

By March of 2023, MSC World Europa will sail to the Mediterranean. Here she will sail on 7-night cruises calling to the Italian ports of Genoa, Naples, and Messina as well as Valletta in Malta, Barcelona in Spain, and Marseille in France.

LNG-powered ships enable cruise companies to build bigger and better ships. One of the reasons is that the environmental impact is significantly less. It strongly reduces local air pollutant emissions like sulfur oxides by up to 99 percent and nitrogen oxides by up to 85 percent. Fuel cost also goes down significantly vs. heavy fuel oil (estimates go up to 31% savings).

The ship’s hull design is a never seen before shape and will make the World Ocean even more effective at cutting through the waves. The ship’s 90-degree plumb bow shaped like an arrow will cut through the water with ease.

The never-before-seen Y-shaped aft opens onto the 341-ft.-long Europa Promenade spanning almost ⅓ of the entire vessel. The quickest way from the top of the ship down to the promenade will be The Spiral – an architectural masterpiece in the form of a dry slide spanning 11 decks.

For those interested in booking a cruise onboard, MSC World Ocean bookings have opened up. At the same time, loyal MSC Voyagers Club members benefit from an additional 5% discount for a period of two weeks, on top of their usual 5% discount. 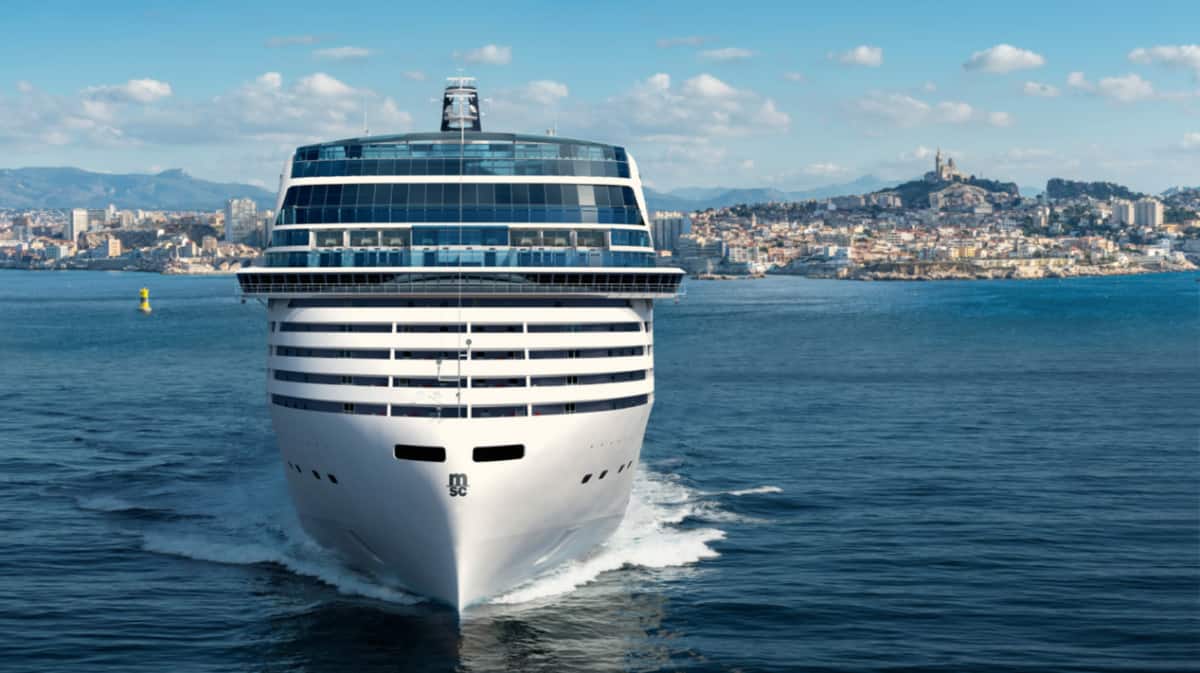