This week we’ve seen some massive cruise news with updates from all three major cruise lines and even more cruise cancellations.

We’ve had one of those defining weeks in the cruise industry with many cruise lines now extending suspensions for even longer. This week it has been all about further cancellations and we’ve got new suspension updates from Carnival Cruise Line, Disney Cruise Line, Princess Cruises, and Holland America Line.

Also from the week, Royal Caribbean announced new short getaways, the Cayman Islands wants to limit cruise tourism along with situation updates from all three major cruise lines. So we better get started as there are lots to get through.

We start with Disney Cruise Line which has now extended its pause on operations through May 31, 2021. In fact, it comes as no surprise as Cruise Hive first reported that the remaining May sailings had been removed from its website several days before the official announcement.

So the cruise line has suspended operations until June with the first cruise on Disney Fantasy currently scheduled to depart on a 4-day cruise out of Port Canaveral on June 2, 2021. For Disney Magic, its European cruises will remain on hold for even longer until August.

Disney Cruise Line continues to work with relevant authorities on resuming operations safely and guests impacted by any of the cancellations are being provided compensation options.

Princess Cruises has announced more cancellations through 2021 as a result of the Canadian Transport Ministry’s decision to ban cruise ships in its waters for one year. The cruise line cancelled select sailings as follows:

Princess is actually engaged with authorities in the United States and Canada to see if any Alaska and Canada & New England sailings can be saved so there could be further details still to come.

For now, Princess has committed to options on land with the Kenai Princess Wilderness Lodge and the McKinley Chalet Resort in Denali as well as the Westmark Fairbanks Hotel during the summer. We can expect an announcement soon on new land packages which the cruise line is currently working on.

Princess Cruises has already suspended operations in Australia and New Zeeland through May 31, 2021, along with most global operations through May 14, 2021, except for this week’s select cancellations that are through 2021.

Holland America Line has followed its sister brand Princess by canceling more cruises. It has been decided to cancel cruises that depart or conclude in Canada until 2022.

This comes due to the one-year cruise ban by the Canadian government. So here are the new cancellations:

The Passenger Vessel Services Act that forces cruise ships to visit a foreign port when departing from the U.S. heavily impacts many cruises from the U.S. that visit Canada and Alaska. It’s not all bad news as Holland America is working on a way to save some cruises to Alaska departing mid-May and sailing roundtrip from Seattle, Washington.

On to Carnival Cruise Line now which announced that all U.S. departures are suspended through May 31, 2021. And yes, this does include the new Mardi Gras. The ship was set to finally debut out of Port Canaveral on May 29 but due to the extended suspension, she is now scheduled to depart on her inaugural cruise on June 5, 2021.

So Carnival’s extended suspension was kind of expected as we already had some hints after the cruise line started sending out new cancellation options to guests. The evening before Carnival made the announcement we also spotted that all May sailings had suddenly been removed from its website.

So with cruises on hold through May, ships will begin to return to service in a phased-in manner starting from June at the earliest. However, there are some ships that we already know will remain on hold for much longer due to delayed dry docks, and that includes the arrival of the new Carnival Radiance at Long Beach in November 2021.

It’s looking like shorter sailings will be a lot more popular moving forward as Royal Caribbean has announced new shorter getaways for just 3- to 5-nights. A total of eight Royal Caribbean cruise ships will sail shorter cruises to the Caribbean across five different homeports in Texas and Florida during 2022-23.

Liberty of the Seas will take a turn in Fort Lauderdale, Florida to sail alternating 3- and 4-night winter escapes to The Bahamas. Mariner of the Seas will continue sailing from Port Canaveral through the winter, now with southbound 4- and 5-night cruises to the western Caribbean.

While we’re on the topic of Royal Caribbean, the cruise line released a major update on its current situation. CEO and Chairman Richard D. Fain called the last 12 months the most painful the company has had to go through in its history.

While a return to cruising is something to look forward to, right now, the cruise line will be focused on its financial numbers, which for all intents and purposes, do not look good. $1.4 Billion is the loss that Royal Caribbean made in the 4th quarter of last year.

Even now, the company is still burning cash at a rate of $250 million to $290 million per month. This amount will increase once the company has the go-ahead to start crewing the ships for guest operations.

Bookings have been excellent throughout for all three brands. Bookings for the first half of 2022 are within historical ranges. However, it shows how big the will is of the people to return to cruises as the company spent little on marketing or sales.

Approximately 75% of bookings made for 2021 are new, and 25% are due to the redemption of FCCs and the “Lift & Shift” program. Very interesting insights into what’s going on with the cruise company at the moment.

Norwegian Cruise Line provided an update on its situation too. The biggest take we got from them was the amount of money lost due to the extended delays of updated CDC technical specifications. In November last year, NCL had started to embark crew members on its ships. The company anticipated it would be sailing early in 2021.

As Norwegian Cruise Line worked to prepare its vessels for a possible return to service in early 2021, it spent an additional $15 million a month on relaunch-related expenses. These actions were in accordance with the CDC Conditional Order, which failed to take effect.

The relaunch costs were mainly due to crew re-staffing, re-positioning and provisioning vessels, implementing new health and safety protocols, and marketing investments.

Carnival Cruise Line President and CEO, Christine Duffy released a new video message on Thursday providing a brief update on the current situation and reassured everyone that the cruise line will be back.

Duffy touched on how important vaccines will be and how they well help cruising get back to business as more Americans get vaccinated. What Carnival plans on vaccine requirement for guests and the crew remains unclear.

She mainly remained hopeful mentioning about the Mardi Gras will soon arrive at Port Canaveral and the new terminal in Miami that recently broke ground.

We finally come to one of the most popular cruise destinations in the Caribbean of Grand Cayman. Well, it seems we could see a cap put on the number of cruise visitors to the island nation.

The comment came from Premier Alden McLaughlin after the island managed to cope without thousands of cruise visitors each day. Apparently, local business owners have also expressed that they did not want to go back to large numbers of visitors.

Nothing is yet set in stone and it all still remains very fluid, a new cruise pier planned for Georgetown also plays a major role for cruise ships in the future. For now, cruises might have stayed away due to the global situation and due to the fact that the premier even mentioned previously that Cayman doesn’t expect any cruise visits this year.

So those are just some of the massive cruise new stories of the week. It was extremely busy with big updates from all the major lines.

We’ve got even more headlines including a look at why cruises should be sailing already, construction begins on the new P&O cruise ship, former Royal Caribbean cruise line extends suspension, and find out when each cruise line currently plans on resuming operations.

If you missed last week, you watch all of those cruise news update right here. 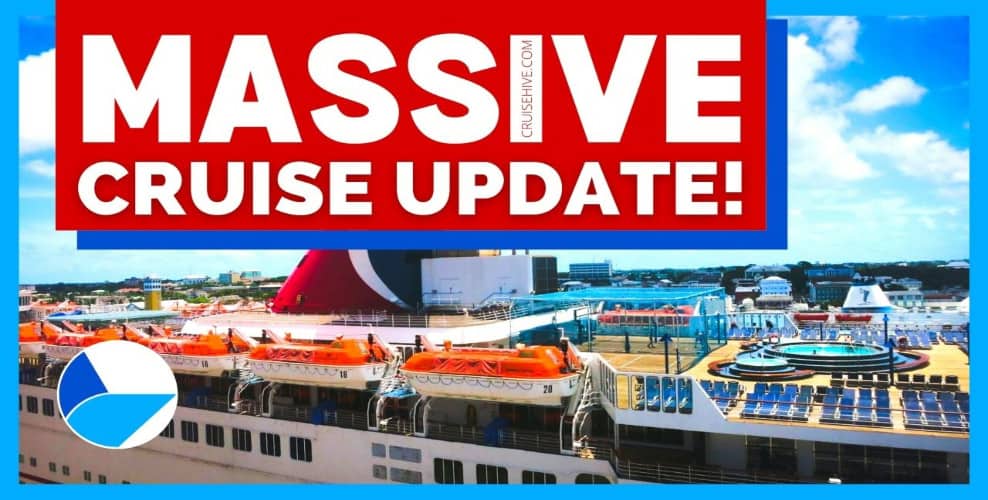